"It's Just A Bad Day" - The Fluctuation of Mental Health: A Journal Entry

We've all said it before, haven't we? Be it to family, to friends, to colleagues, or even to ourselves in the midst of a pep-talk...

"I'm just having one of those days."

It's a phrase that others rarely require further explanation for. It's just accepted at face value, almost as though it were part of some universal language - 'one of those days' need not be justified.

People experience them (including ourselves), we let those people (or ourselves) be, and we confidently assume tomorrow will be a better day.

And, for me, today has been one of those days.

I woke up naturally at around 8am this morning, but I could tell by the way I was feeling that I wasn't quite ready to get up yet. My eye-lids were heavy and my head hurt a little, so I could tell that I hadn't had sufficient sleep.

I didn't get over until around 3am last night, tossing and turning, having some kind of quarter-life crisis over my (perceived lack of) future.

For this reason, I was pretty certain in my assumption that a couple more hours of sleep would probably do me the world of good. The fatigue I was experiencing, the I-have-no-motivation-to-do-anything-whatsoever attitude that I was harbouring; it was all down to a lack of rest.

Or, at least, that's what I thought.

That was all the clarification that I needed.

Today was going to be 'one of those days'.

**SPOILER ALERT** - These two elements of awareness cannot co-exist, and I end up driving myself stir crazy.

Here's the kind of dialogue that occurs in my head... 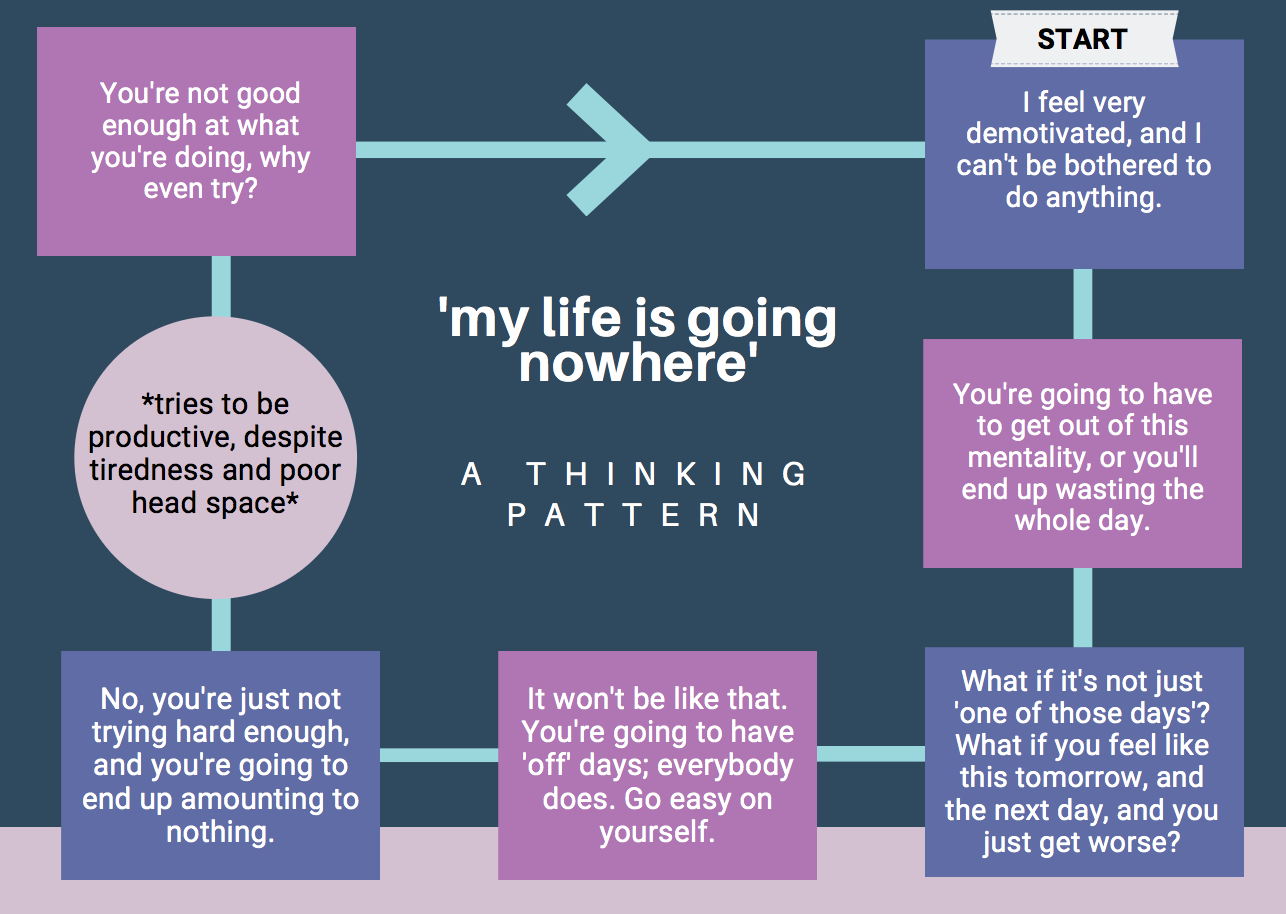 As you can tell, the whole situation is a bit of a Catch 22, because feeling demotivated and tired means that, whatever I do, I won't perform my best.

If I were to give myself the day off, I'd feel like I wasn't trying hard enough, but if I were to attempt major productivity, my performance (hindered by lacking energy and motivation) would leave me questioning my worth and ability.

And so, whilst most people (understandably, of course) will wish to share their successes, achievements and celebrations online today, I wanted to use the internet to hold my hands up and say:

I had plans today. Good plans. Not quite the world-domination kind, sure, but plans nonetheless.

Getting up early. Going to the gym. Painting my nails. Applying for a competition aimed at singer/songwriters. Practicing for an upcoming audition.

Not necessarily in that order.

Instead? Let me share with you what I've actually done today...

So, in other words, I have done none of the things that I had initially planned on doing today, and I feel pretty damn terrible about it.

And, if I'm not doing the things that I'm supposed to be doing to support all of that, then I obviously don't want it, and I definitely don't deserve it.

Now, I realise that this is the part of the article where I usually start to reel off the positive affirmations and tell everyone that we should be kind to ourselves, be kind to others and always put emotional wellbeing first.*

*NOTE: please continue to do this, it still stands.

But, I haven't got any kind of ending planned, this time. I can't tell everyone that I've taken deep breaths, settled myself down and remembered that it'll all be okay.

I haven't. I still feel like shit. But, tomorrow is a new day.

And, as my favourite person once said:

like a dandelion up through the pavement, I persist

So, let's say this is less of an article, and more of a journal entry. Let's say that, rather than telling everyone to keep the faith and find the good in each day, I wanted to tell everyone that it's okay to lose that faith, sometimes.

You don't always have to count your blessings.

Today, some people will have achieved incredible things. I've thought about those people a lot, despite not knowing who they are, and I've also thought about the fact that, in contrast -

I spent more time in bed today than I did out of it.

I spent more time feeling anxious and sad about the future than I did feeling excited.

Sometimes, we may not conquer, but it does not mean we have lost.

So, hey, today has been a bad mental health day. I survived it.

May you find the strength to survive yours too.