Almost everyday, I come across a variety of terms that refer to the relationship that I have with myself.

Be it on social media, be it in a book I'm reading (which rarely happens, I'll be honest), or be it in a conversation with someone.

No matter when, and no matter where - somehow, that same prefix will appear.

And, for a lot of years, arguably without even realising, I associated such terms with something else. It's something totally different, but something that, visually, isn't all that dissimilar.

I operated within the belief system that participating in self-care was entirely selfish. That self-respect was simply setting unreasonable boundaries. That self-love was arrogance.

Of course, in hindsight, the premise of such seems a little ridiculous, and I guess a lot of that is because perspective has largely changed over the last few years. A 'self-care routine' is no longer such a foreign concept, and putting ourselves and our own needs first is far more encouraged than it is frowned upon.

Still, I'm very much aware that, for some people, this won't be the case.

And so, I wanted to write this article to tell you why it absolutely should be.

For most of my life within school, I was so very against myself.

I would often compare myself to others, as I'm sure so many can relate to; identifying individual people and their individual qualities - the good things about them, the best things, only to conclude that I possessed none of said qualities.

Trying to pursue performing arts meant that I was often surrounded by talented people that wanted the same career as me, only, in my head, they were far more suited to it than I was.

In fact, I specifically remember that, as a 14 year old, despite taking one of the lead roles in my school's annual musical, I would cry after the majority of the rehearsals. I didn't understand why I'd been given the role, and all I could think about was how embarrassing it was going to be to perform for an audience alongside such talented people when I was so...untalented.

It was pretty much text-book low self-esteem, and I was very aware of such.

But today, I want to talk about a different kind of low self-esteem.

And, without even realising it, that could be the case for you, too.

Let me try and put this into context...

For those of you who have read my previous articles, you'll know that I'm in therapy for my attachment to fictional characters.

(And, for those of you that didn't know, there's a fun little fact for you all, ha!)

Even though, I'll be honest, from around 2017 onwards, I really thought I'd accepted that bit of myself!

I had a much greater awareness of it, some of those closest to me knew a whole lot about it, and people kind of expected it of me.

That last bit almost felt like a nod of approval, as though people looked at what I was experiencing and thought "hey, that's a valid thing. We knew you'd get attached to that character, and what of it? If it upsets you, it upsets you."

And so, having found a select few that were willing to offer me that space of acceptance, I found myself accepting it, too, and that felt a hell of a lot like self-love to me.

I was being more honest about it to those I could trust, and in return, they started to understand me a little bit more. They started to "get me".

And, in my head, if others got me, then I must have been explaining myself well. I must have had a valid point in there somewhere.

I must have still been lovable.

In hindsight, I realise that I was experiencing a branch of something called Conditional Self-Esteem, whereby I deemed particular parts of myself 'acceptable' or 'worthy of love' once I had subconsciously (and successfully) sought out the approval of others.

Below, I've put together a small list of positive affirmations that I used to tell myself, and when you first read them, it seems as though they're as close to self-loving and self-accepting as anyone could possibly get! 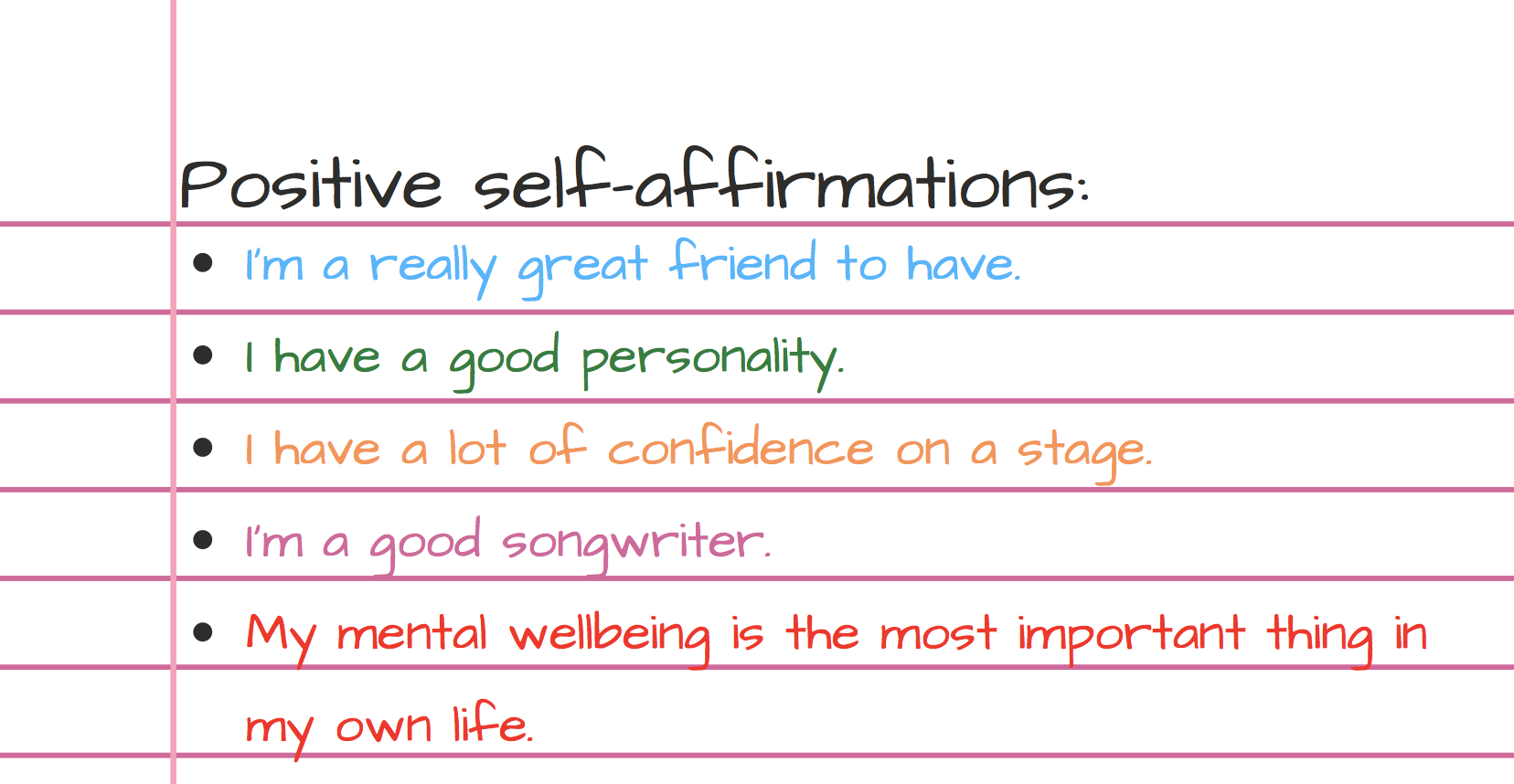 Now, it's lovely to think those things about myself, and it's super important, too! To go from having next to no self-esteem to being able to list these affirmations is wonderful, and I would never undermine an achievement like that.

However, last year when I was going through quite a dark period of time, I learnt very quickly that I only ever seemed to value myself when I could clearly see the things to be valued, when others were telling me that there were things to be valued.

I mean, let's take the premise that I'm a good songwriter.

This is something that took me years to believe, and even now I have my doubts (not to mention the fact that "good" songwriting is subject to opinion, anyway). But, just like anyone in anything that they do, I have very off days in which I can't write anything.

Whatever it is, it used to result in me concluding that I was, in actual fact, a sh*t songwriter.

And the same applied to every single thing on that list.

I only valued the better parts of myself, and I only did so on the better days.

Since then, I have managed to rearrange my thought process, allowing myself love and acceptance on all levels, not just the more desirable ones.

Whilst there are obviously days on which I do not find it easy, I am getting a lot better at loving myself completely, and I hope that my perspective can help others, too.

Let me pitch an analogy to you.

It’s a beautiful day outside (those of you in the UK are going to have to really use your imagination, here), the sky is blue, the clouds are few and far between and the sun is shining.

But then, the next day you get up and the sky looks nothing like it did yesterday. It looks bleak, with thick grey clouds and no sign of the sun anywhere.

But, do you believe that the sky is permanently grey, now?

Of course you don't, because it isn't.

No matter what shadows it, the sky remains blue beneath. It's just science. It always will be.

And then, what if we replaced the sky in this narrative with you?

Because, yes, you're going to have difficult days, difficult weeks, difficult months, even. Perhaps you'll be shadowed by a variety of things during these times - tiredness, low mood, lack of motivation, an illness (mental or physical), etc.

Do those things change who you are at the core?

Of course they don't.

No matter what shadows you, you remain inherently you beneath.

The thoughts you have that devalue who you are? They cannot actually change your value. Not underneath the clouds, not at the core.

I believe that self-acceptance is a process and a journey; it's certainly not something that happens overnight. The important thing to remember, though, is that no matter how far along you are on that journey, you can get there.

For those of you who feel you're very much at the beginning of the journey towards self-love, I want to take this opportunity to offer you a piece of advice from actor/screenwriter Wentworth Miller.

He is someone that has had a colossal impact on my own self-acceptance, and during a Q&A held by Oxford Union, Miller talks about the friendships he‘s maintained throughout his life, knowing he is a good friend to others, knowing how to be there for others.

However, when comparing this to the way he used to respond to his own troubles, Miller says this...

If I spoke to my friends the way that I used to speak to myself, I would have no friends.

Are you doing so in a way that you would for a friend? Because that’s what you are, you know? You are your friend.

So, be kind to that person. They deserve it.

And, if you’re someone who feels a little further along in your journey towards self-acceptance, then I propose to you, this:

Whenever you're being kind to yourself (which should be as often as humanly possible), be mindful of the conditions that you may subconsciously be setting.

Do you value yourself just because you’re good at something?

Do you value yourself just because someone else thinks you’re valuable?

Or, do you value yourself just because?

Although I know it isn’t easy, the latter is something worth aiming for. The latter is Unconditional Self-Esteem.

And, once you no longer need a reason to be kind to yourself, once you do so just because, you'll find that it matters less and less how much value others place on you.

Of course, I am by no means saying that the love we receive from others isn't important. Having a circle of trust, a group of others who you can rely on and who can, in turn, rely on you, is wonderful.

But, make sure you can rely on yourself, too.

Why can't you do the same for yourself?