Life in Competition: The Impact of Social Media on my Mental Health

I struggle to remember what life was like before social networking was introduced. You know, the days when we couldn't keep in touch with friends and family, no matter their location, and we couldn't keep up to date with what everyone else was up to, be it through photographs, social media stories, tweets or statuses.

People went about their day to day lives without sharing their experiences online, and only those closest to them could stay informed about what those experiences were, usually through talking. Like, face to face.

These days, however, most of us know most things about most people's lives.

Or, at least we think that we do.

Because, social media has allowed us to think such a thing. After all, we watch the lives of others through a phone screen - the successes, the failures, the celebrations and sometimes the commiserations, even though, a lot of the time, these are the lives of people that we don't engage with on an interpersonal level.

And yet, our interest remains.

Of course, on a two dimensional level, this is absolutely fine. Everyone is a little bit nosey at heart, even if they won't admit to it, and there is no harm in keeping up with what the rest of the world is busy doing.

The problem, however, is when we start using it as a basis for our comparisons. When we look at the reality of our own lives, and we compare that reality with the lives that other's present on social media.

Trust me, the results will never, ever be in your favour.

A few weeks ago, I posted an article on here about the relationship that I have with fictional characters, and the detrimental effect that it can have on my mental wellbeing. Whilst I am starting to develop a good understanding of why this attachment occurs, there are other, more real elements of it that continue to have a severe impact on how I live my day to day life.

An example of one of those elements?

Following the actors on social media.

Now, I imagine this is something that most of us do. The appeal of apps such as twitter and Instagram is, for many, the ability to interact with media personalities that we otherwise wouldn't have access to. It strengthens the relationship that celebrities have with their fans and vice versa, and we, as individuals, almost feel like we get 'backstage access' to a famous individual's reality.

But, this 'backstage access' isn't all that, well...backstage, really. It's rather the highlight reel of that person's life, often presented as what goes on 'behind closed doors.'

And then, naturally, we look at this 'behind the scenes' insight and wonder why our life, even at it's best, isn't as extraordinary as said individual's life.

Of course, it doesn't have to be somebody famous. Perhaps there's a non-celebrity who's Instagram feed is, in your eyes, the epitome of a picture perfect life. Either way, chances are that the thought process will be very similar.

And that thought process, if not monitored and rationalised, can be extremely damaging...

...something that has been proven to me as recently as this very weekend.

I had no plans on Friday evening, and so I spent some time (as the majority of us do) scrolling mindlessly through social media. This is a pretty uneventful thing to do for the most part, obviously, but then I came across something that ended up changing the emotional course of my entire weekend.

An actor from a show that I'm particularly fond of posted something on Instagram about going to Paris.

It was simply a photograph of some drinks in the airport; a typical pre-holiday snap with their other half tagged in the picture. Irrelevant in the grand scheme of things, right?

Except, my thought process went as follows. 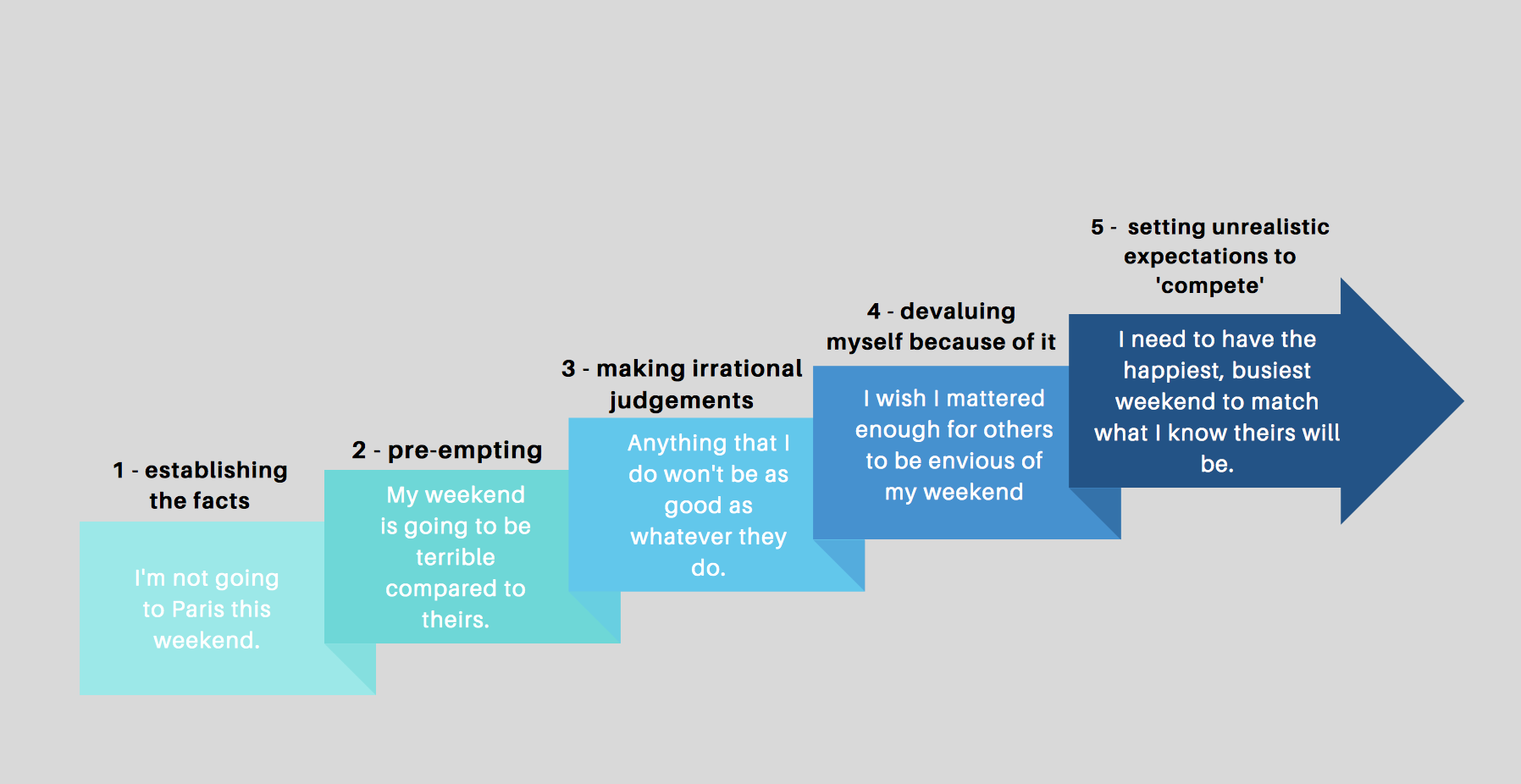 What started as a casual, relaxing and perfectly normal Friday night quickly became a lonely, dull and tragic Friday night instead. My own head turned on itself, and...

I started to cry (SHOCK), instantly assuming that this actor mustn't ever encounter an ordinary weekend, and feeling an overwhelming sense of embarrassment regarding who I was as a person and what the next 48 hours looked like for me in contrast.

Now, let's be honest, here. Part one of the thought process? Not at all problematic. It's pretty easy to come to that conclusion, because there's evidence to back it up. It's the truth.

But, the rest has absolutely no substance whatsoever, and yet it somehow manages to hold so much power in my head. Any plans that I perhaps do have suddenly seem inadequate, and I don't want to do those things anymore.

Nothing that I ever did was going to be good enough, even though, in hindsight, my weekend has been okay. I walked the dog several times, I went to the gym, I wrote a song, and on Saturday evening I went out for drinks with friends.

But that didn't matter.

Everything felt entirely futile, all because I kept comparing my reality to the social media of this actor. And it goes without saying that something small, be it sitting down in front of the television with a cup of tea, maybe...that just wasn't an option.

And if that's the case, then what the hell have I got to aim for?

No, of course it doesn't. I know that better than anyone. It's ridiculous and nonsensical as a train of thought, and yet I can't seem to break the cycle.

But hey, welcome to my brain. It's a wonderful place to be.

The thing is, what we see on social media is merely a snapshot of other's experiences. There's always somebody better, isn't there?

What's more, the sad bit is, had I never seen the actor's post on Instagram, I actually think my weekend would've been quite suffice.

But, instead, I've spent the majority of it putting together an entire narrative in my head of how perfect this individual's weekend had been - all based on about 7 things that were shared on social media. I can't imagine how much more I could've enjoyed over the last 2 days if I hadn't been torturing myself like that.

And it isn't the first time that this has happened, either.

There's always a family that seems to be getting on better, going on nicer holidays, having a nicer time.

Then there's the ex that seems like they're handling the start of the break-up better, enjoying themselves more and missing you less.

But, not everything is as it seems.

I've been reading 'The Sun and Her Flowers' recently, a collection of poetry by bestselling author Rupi Kaur, and I found something within the book that spoke volumes to me.

Think about a time when you've had to let something go. Perhaps leaving school, moving out of your childhood home, or even the breakdown of a relationship, be it a romantic one or a platonic one.

Now, think about how often you've been accused of looking back at what you've left behind through 'rose-tinted glasses'. I'm going to make a confident assumption that this applies to the majority of us.

You see, I think that the lives we all present on social media are entirely rose-tinted; skewed to fit the image that we want others to receive.

I mean, let's be honest, I wasn't ever going to log onto Instagram and see the actor post a photograph of piss-wet weather and their angry other-half with the caption:

The people are rude, the weather is shit, and we've just argued about where to go for dinner. Happy Saturday.

Because, why would anyone share that side of their life? I certainly wouldn't. In fact, I could scroll through 80% of my happiest Instagram posts and identify more than one negative thing that I was dealing with at the time.

Yet, nobody following me on social media would've had a clue, because all we share online is the tip of the iceberg.

It's something so difficult to remember, I know that just as well as anyone, and I simply wanted to share this article as a means of reaching out to anybody else that struggles with the toxicity of social media.

In this day and age, though, it's very difficult to cut ties with it. In fact, I've tried to do so before and wound up feeling very isolated from the ''real world'', almost as if I was out of touch with everything.

How crazy is that?

So, if you're reading this, desperately wishing you had the willpower to delete your social media accounts, please don't be too hard on yourself. I feel exactly the same.

And if you see things on social media and wish your life was half as interesting and fulfilling as that particular individual's, please remember that what you're witnessing is an edited, rose-tinted version of the events that actually took place.

One of the key cognitive distortions recognised in psychology is overgeneralisation, whereby an individual comes to a general conclusion based upon very little evidence.

What I did this weekend was look at a singular snapshot of somebody else's life, and then make a huge, broad assumption that their life must be this happy and exciting all of the time. That's overgeneralisation.

And yet, it's what the majority of us do when we see something on social media, right?

So, don't believe everything you think.

Don't believe everything you see.

And let's stop comparing the 24 hours in our day to the 2 second snapshot of somebody else's day.