For Those Who Find New Years Eve Emotionally Difficult to Deal With...

As we all know, 2019 is about to come to a close, with everyone preparing themselves to step foot into a brand new year and, this time around, a brand new decade, too.

There are a multitude of conversations taking place, many of which are built around the concept of 'new year, new me', a promise that 90% of us make to ourselves and those around us.

I'm sure I'm not alone in saying that, with each new year that passes, I solemnly swear to myself at least one of the following:

"I'm removing toxic people from my life in the new year."

"I'm going to lose some weight in the new year."

"I'm practicing self-love and putting me first in the new year."

Now, on one hand, all of that is great. Each of these resolutions bring positive changes to our lives, if they're executed successfully, of course. It's important to have goals and ambitions, particularly when they're shaped to change our lives for the better, and I am certainly not here to discourage people from such.

Let's take the beginning of my year as an example.

I entered 2019 with a brand new job in one of the world's Top 10 Law firms. Mentally, I was in the best place that I had been in quite some time, and it seemed like things were falling relatively into place.

This year, I‘d vowed to grow up.

I was going to start taking responsibility, to take a step towards a somewhat adult life, with plans to eventually move to Newcastle and start gigging within the area more often.

But, contrary to the promises that I made to myself at the start of 2019, I am, in fact, ending this year living back at home with my parents, unemployed and feeling incredibly unprepared for my future as an adult.

Well, because earlier this year, I suffered an emotional breakdown of sorts, and I had to accept that no, I couldn't hold down a full time, 9 'til 5 office job.

No, I couldn't cope with living away from home at that particular stage in my life.

And no, I couldn't seem to manage anything remotely close to adulthood.

What strikes me, though, is that the aforementioned quickly became my only focus.

My new year goal had been to essentially 'get my life together' (for want of a better term), and because that hadn't gone as planned, I instantly branded myself a failure.

It didn't matter what else I'd faced; I didn't consider the emotional growth that I'd gone through. Instead, I simply evaluated my entire year based upon who I wanted to be entering this year, versus who I am now.

But, whilst it's clear that my New Years Resolutions contributed to this self-depreciation, I also think some of the pressure came from the passing of time.

Let's be honest, how many times a year do you hear people losing their shit over how quickly time is going by? Every significant event in our lives 'feels like yesterday', we 'can't believe it's Christmas already', and we're constantly told to 'live each day like it's our last'.

It's no surprise that we feel the pressure to reach certain milestones by a certain stage in our lives, because we're always being reminded, one way or another, that time is not on our side. And, this is reinforced significantly when we enter a brand new year.

So, whilst for some people, New Years Eve is a gigantic piss-up with friends and family, for others it's an anxiety-inducing experience in which one has to face their fear of change.

Of course, when you combine the fear of change with the pressure of change, it can result in some pretty overwhelming thoughts and feelings. Since new year is all about change, it's difficult not to experience unhealthy thinking patterns, some of which I've listed below. 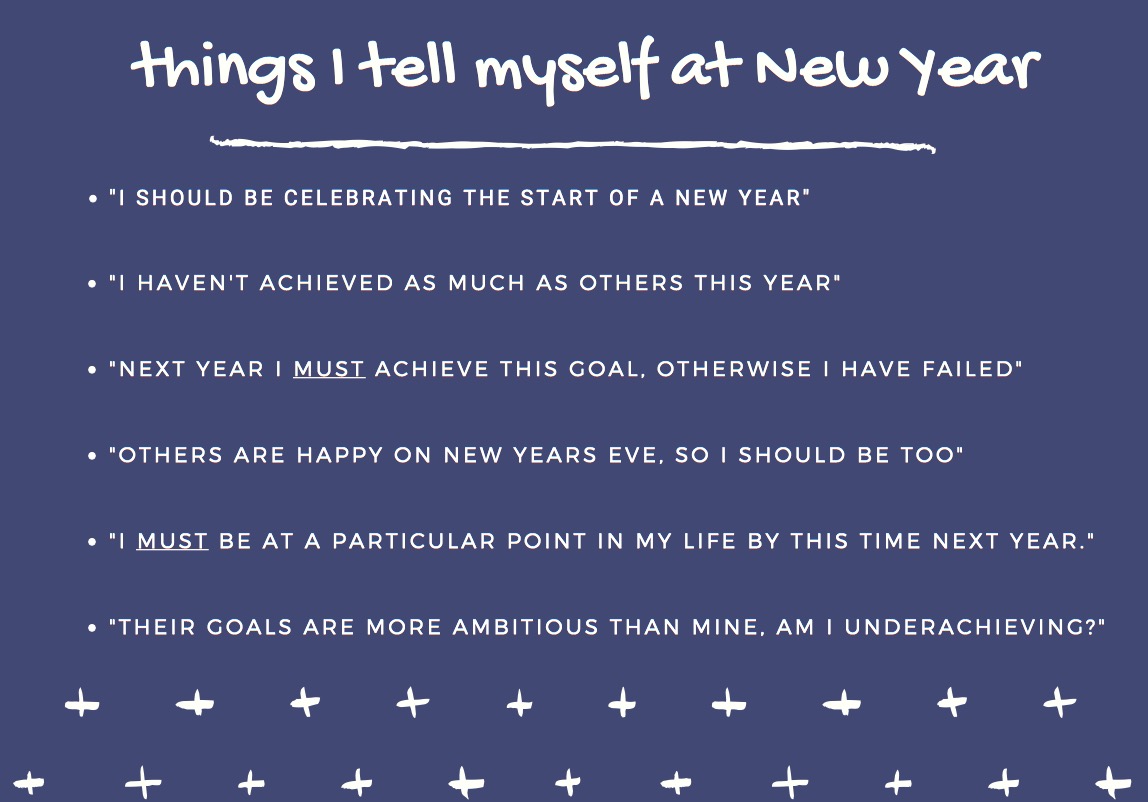 If you're anything at all like me, at least one of these thoughts will have crossed your mind, and if that's the case, then...

I just want to take a moment to discredit each and every statement that's listed above.

Now, I know that thoughts like this can't just be switched off; it's a lot easier said than done to restructure your thinking and to treat yourself kindly, but it's extremely important to remember that it is possible.

In a recent article that I posted, I discussed the toxicity of social media and the way that we, as a society, compare our own realities to the highlight reel of other's lives. These are the positive impressions that are presented to us on apps such as Facebook, Snapchat and Instagram, none of which are an accurate depiction of what really goes on behind closed doors.

It's almost inevitable that, over the next 48 hours, people are going to share the highlights of their past year on social media. The things that they've achieved, the places that they've been, the challenges that they've overcome and what they hope for in the new year.

That, in itself, is completely fine! People should be proud of themselves, and I certainly don't discourage positive self-reflection. It only becomes a problem if you start to draw comparisons, thus concluding that your year has been inadequate.

And, what's more, seeing the things that other's have done with their year? Let's just say it feels a little like watching the sand fall rapidly to the bottom of our own egg timer.

But, it's okay. There is no rush. Life is not a competition.

Maybe you're going out and getting drunk to see in the new year. Maybe you're spending time with loved ones, or having a quiet night in.

Perhaps you're simply trying to make it through.

I've spent new year upon new year feeling anxious and distressed, worrying about what I'm going to achieve and what the future holds, all accompanied by an irrational belief that I'm running out of time.

But, what is time, really?

Okay, that's deep, I know, but hear me out, because it kind of proves that the pressure surrounding new year is nothing short of unnecessary.

Let's say you live in the UK (like me!), and the clock strikes midnight. We're officially entering 2020, and it's time to panic about the future and mount impalpable pressure on ourselves to make this year 'our year'.

Oh, and poor Los Angeles haven't even left twenty-flaming-nineteen yet!

Now, I know this all sounds hideously philosophical, but what I'm trying to say is that time is simply a human-made concept.

You wouldn't any other day, would you?

And that's what this can be, if you allow it to be. Just another day.

What does truly matter is that the pressure alleviates, and you take care of you.