This, for me, has been the most difficult article that I've written to date (and, yes, my opening sentence is the very last thing that I'm writing), because, upon starting this, I barely even knew where to begin.

As we all know, the last couple of weeks have been incredibly poignant for the Black Lives Matter (BLM) movement after the horrific, unlawful killing of African-American man George Floyd sparked outrage across the globe.

Since then, the BLM movement has taken it's rightful place at the centre of society as we fight against the systemic racism that has seen so many innocent black lives lost (often to police brutality), and the appalling lack of justice surrounding such.

At first, I considered not writing anything on the matter, because I didn't really feel that it was my place to do so. I am a white female and I have never experienced racial prejudice, nor will I ever experience such in my lifetime, so who am I to sit here and play the keyboard warrior regarding an issue that I could never truly understand?

Only then did I begin to understand that the BLM movement was not operating under an 'opt in, opt out' policy, and I simply cannot afford to take the "my voice won't make a difference" approach.

After all, if we each thought like that, there would be a lot of silence.

And, this movement needs all but silence.

I want to begin by talking about white privilege, something that I thought I understood, but in hindsight, did not.

Generally, a lot of what happens in the world weighs heavy on my chest like a physical and emotional anchor, and it is often the case that, should I ever feel good about something, my brain will reprimand me almost immediately.

After all, how could I possibly feel positive amidst everything else going on in the world? It feels ignorant, it feels selfish, and it feels a hell of a lot like privilege.

And, sure, this doesn’t mean that white people do not experience hardships.

It just means that none of those hardships come down to our race.

I see the term ‘white privilege’ every day now, and I've come to understand my own a little better as I read more about it. I recognise that feeling overwhelmed by the constant stream of facts and statistics regarding systemic racism is a privilege in itself, because the extent of my pain is exactly that.

Overwhelming. Simply emotional. Those statistics are not my personal, physical experience, and I can simply switch off from them with the click of a button.

Sometimes, perhaps ashamedly, I do.

Because, now and again, logging onto social media and seeing all of the information about white privilege and the oppression of people of colour (POC) makes me feel like I am somehow racist, and I come off of the app feeling like shit. Feeling helpless. Feeling that ever growing weight on my chest.

Of course, that's nobody's problem but my own. This isn't about me or how things make me feel.

I'm just saying it how it is, and I think it’s important that I do so.

I fear that, were I not to be honest with myself and with others, my activism would become self-serving; sharing things/talking about BLM, signing petitions, donating money, all because I want to feel better about myself. All because I want others to know that I absolutely support the movement.

Yes, being able to switch off for an hour or two is privilege, but as long as your intentions are to continue the momentum of the Black Lives Matter movement for the right reasons, then I think time away from social media to protect your mental well-being is totally okay.

I think there is an element of defensiveness when it comes to talking about white privilege, with no white individual wanting to believe that they are, in fact, part of the problem. It's a totally understandable response, particularly if, like me, you try a little too hard to be what the world would perceive as a "good person".

Conversations about race can sometimes ignite retaliation and denial, with many white people saying - "but, I'm not racist!" - it's crossed my mind a couple of times, for sure.

But, there are varying forms of racism, and I found this resource (taken from this website) extremely helpful in terms of understanding the four different types. 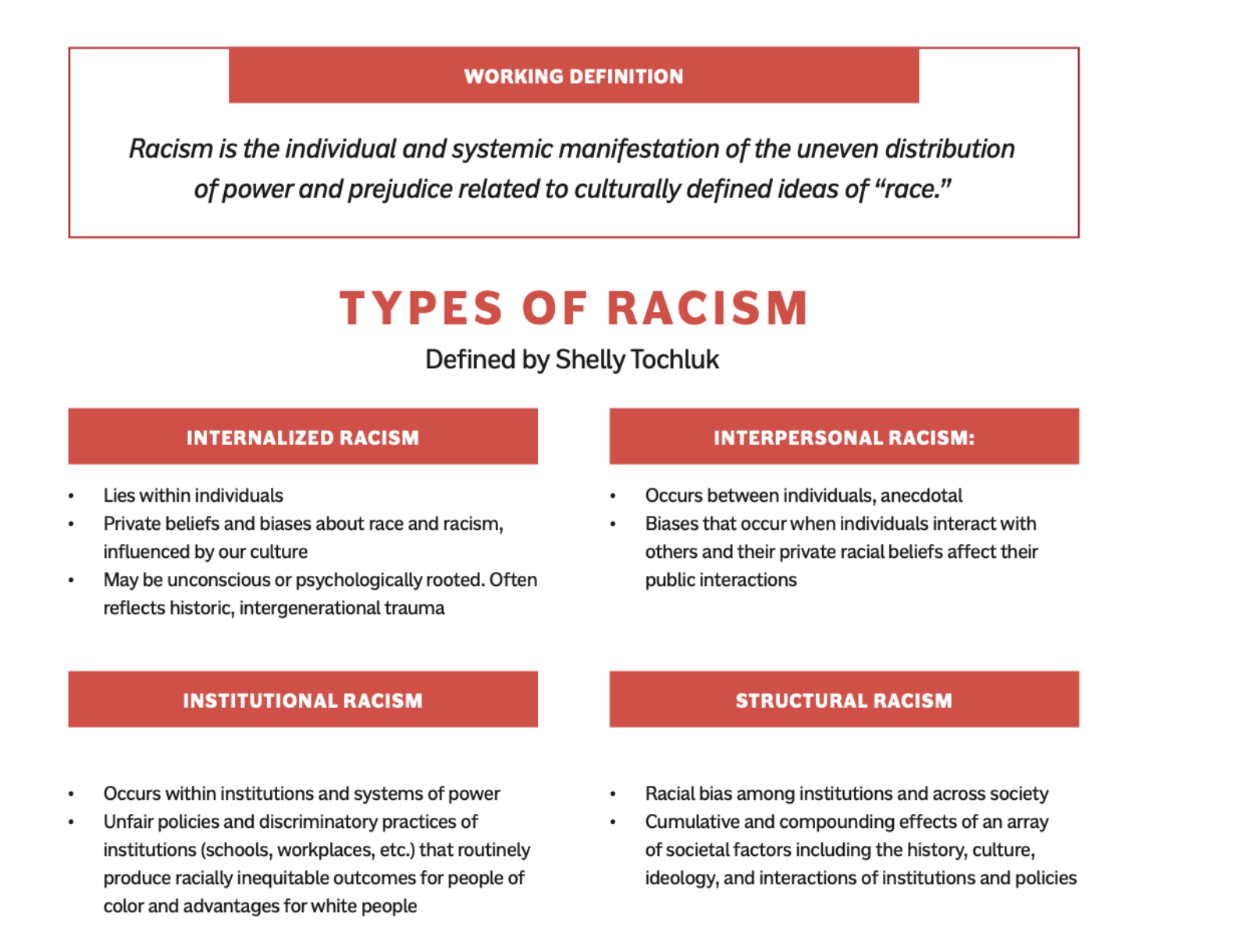 As you can see, racism is not as simple as whether or not you use racial slurs. It's not just a case of not believing that the white race is superior.

Of course it is.

But you cannot exclude yourself from this narrative simply because you do not participate in direct racism, or because you have friends who are black/POC. You cannot assume yourself exempt from the problem because you saw the murder of George Floyd and agreed that it was wrong.

Racism is so much bigger than that, and the protests that have been taking place across the globe are not just a retaliation to the murder of one African-American man in the USA. George Floyd is not the only black person to have lost their life to racially-driven oppression and police brutality, and you are wrong if you think this is an isolated incident.

These protests are a stand against year upon year of institutionalised racism, not just in America, that is engrained within the systems we are lead to believe will teach and protect us.

On that note, I want to talk a little bit about the United Kingdom and the way in which we, as a country, have responded to the BLM movement.

I have seen several takes on the fact that British people have been out protesting in the masses, with a lot of people expressing their disapproval of such given that we are in the middle of the coronavirus pandemic.

I see too much focus on the protestors' lack of care and consideration for the NHS, and not enough focus on the fact that these people are having to fight for basic human rights despite being in the midst of a pandemic.

Black British people are twice as likely to die from Covid-19 as white British people, and yet they continue to put themselves and their families at risk by attending these huge protests.

Well, because it is an issue that cannot afford to be slept on.

Think about it. The matter of equality, the matter of basic human rights? They aren't things that can be parked up until we have the virus under full control.

This world has too many issues at hand for it to operate on a 'one problem at a time, please' basis.

Especially when said issues are happening on our very own doorstep.

Below, I've curated just a few examples as to how.

Of course, the list I've just given is not exhaustive by any means, but it's a foundation of proof that racism is a problem within the UK.

We can no longer misplace all of the blame.

The last thing I want is for this article to come across patronising, chastising, or as though I claim to be an expert activist.

I hold my hands up in saying that I am accumulating so much more knowledge than I ever have done before, and I realise that racism being a point of learning for me rather than something that I experience is a privilege within itself.

Below, I'm going to add links to a few resources that I have found helpful - some of educational value, and others that identify ways in which you can help.

Because, you can help, big or small.

I was lucky enough to study Sociology at A-Level, that of which gave me a solid primary understanding of systemic and institutionalised racism, but I didn't take that information far enough.

No matter how disgusted I felt at the facts, the statistics, the stories - I still left it at the classroom door.

Please, if you are reading this, don't make my mistake.

Resources that taught me something:

What you can do to help:

PLEASE NOTE: None of these lists are at all exhaustive, they're just resources that I have found personally helpful. If you see this and think there is a resource worth adding, please get in touch and let me know. :)

Am I A Bad Person? - Making Mistakes and The Art of Forgiving Yourself